Ann-Marie Taranto, a teacher in Raleigh, North Carolina, and her class of second and third graders noticed wild temperature swings during the end of February and first two weeks of March. In one February week, high temperatures fluctuated between 70°F and 46°F.

“There were a lot of birds on the roof of my house, and now they’re gone,” said Amelia Mills, one of Taranto’s students.

We have seen a weird pattern of temperature over the last 5 days. The lowest was 46 degrees F. and the highest was 70 degrees F. The weather has been like a yo-yo. We have had more rain than sun, so there is mud everywhere. Some plants are getting buds and the grass is starting to turn green. We saw some wasps. The evergreens on our playground, however, have died! We haven’t been able to play outside very much.

Chaotic spring weather isn’t unusual, but Taranto said this year is particularly bad. “In North Carolina, we have a saying, ‘If you don’t like the weather, wait ‘til tomorrow.’ But it’s never been this extreme,” she said.

Taranto wasn’t alone in observing a warm-to-cold whiplash. In Chicago, a beautiful 60°F day turned rainy and cold overnight.  Not to be outdone, Connecticut saw temperatures snap from highs in the mid 70s one day to snowing the next.

And one New Yorker, Göksu Pişkinpaşa, said that the rapidly changing weather has made it hard to figure out how to dress each day.“Obviously there are a couple of reasons like climate change,” Pişkinpaşa said. “But I just want to know what is actually going on– what is the level of it?”

Is spring weather getting more chaotic?

Actually, by some measures, spring weather has gotten less chaotic.

Elizabeth Weatherhead, a research scientist with the Cooperative Institute for Research in Environmental Sciences in Boulder, Colorado, says that while weather near the poles has become more variable in the spring (more on that soon!), the trend in the mid-latitudes — where mainland U.S. residents live — is the opposite: Weather is getting “stuck.”

This means that, in general, weather — be it high temperatures, extreme storms, or a lack of rain — stays the same for longer than it used to. Researchers and meteorologists have a term for this phenomenon of stuck weather: persistence.

When that difference decreases, the jet stream, a river of air in the atmosphere that travels the boundary between hot and cold air, grows weaker and more prone to creating weather patterns that stick around for a while.

But Francis said, “The increase in persistence is most supported for winter and summer — less so in fall and spring.” She noted that the impact of the warming Arctic on spring and fall weather patterns are not well studied and that it is something she’s working to address in her current research.

So if the weather in much of the U.S. is actually becoming less changeable, why does this spring feel so wild?

The answer may lie in two other climate-linked phenomena: the early onset of spring and the increased frequency of nor’easters.

For decades, the U.S. has been trending toward an earlier spring. The National Climate Assessment reported that the average length of the frost-free season in the U.S. was 10 days longer between 1991 and 2011 than it was from 1901 to 1960.

U.S. residents got a taste of that shift this year. By the last week of February of this year, spring seemed to have arrived. Birds returned from their winter vacations early in Madison, and daffodils poked up out of gardens in New York. Temperatures climbed to 70°F in Massachusetts and made perfect bicycle days.  While in Raleigh, Taranto’s students found that their strawberry plants had begun to bloom.

On February 28th we photographed our strawberry plants again–there were multiple flowers on several plants!

The warm temperatures led National Park officials in Washington, D.C., to predict that peak cherry blossom bloom time would arrive in the second-to-last week of March.

But then the cold came back, causing officials in D.C. to revise their forecast and people throughout the eastern U.S. to wonder where spring had gone.

The early spring in the eastern U.S. was interrupted by a series of storms called nor’easters. Nor’easters are a common type of winter storm in New England and are caused by the interaction between warm air from the Atlantic and cold air over the land of the Northeast. It is not common to get so many nor’easters in such quick succession, said Boston meteorologist Tim Kelley.

While it may seem counterintuitive, climate change could be aiding in the creation of these big winter storms. According to the National Climate Assessment, winter storms have increased in frequency and intensity across the Northern Hemisphere since 1950.

A February 2018 study by Francis and two other researchers suggested that there’s a correlation between warm Arctic weather and outbreaks of winter storms in the eastern U.S. The study, published in the journal Nature Communications, found that for several weeks after warm spells in the Arctic, the likelihood of winter storms in the northeast increased.

Last winter, Arctic temperatures were well above average, and the region experienced record-long warm spells. Then, in March alone, the eastern U.S. was slammed by four successive nor’easters. The storms brought high winds to Taranto in Raleigh, dumped snow on Massachusetts, took out power lines, and flooded coastal towns. A seventh grade class in Ipswich, Massachusetts documented the impacts of each storm.

Hit with yet another Nor’Easter. When will it stop?

This is a photo of the flooding that we had in our town, after one of the big storms we have had this passed month.

Several factors helped create those nor’easters. For one, the area of the Atlantic off the southern and mid-coast of the U.S. is fed by waters from the Gulf of Mexico, which saw record warm temperatures throughout last year. Warmer ocean water can strengthen nor’easters by increasing the difference of the air temperatures over the water and land. 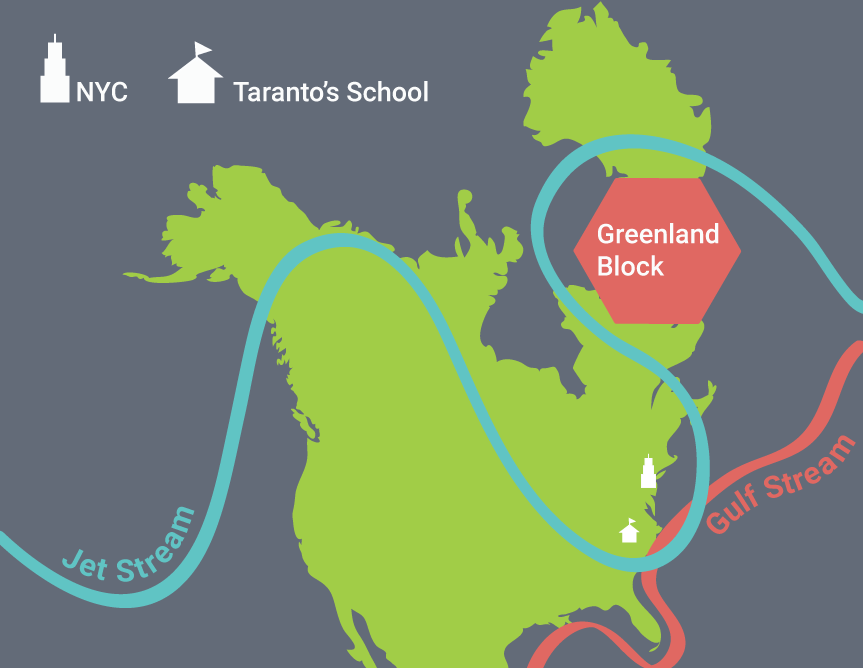 The weather pattern the eastern U.S. has seen for the past several weeks brought cold air down from the Arctic where it met up with the warm air over the ocean Gulf Stream which created good conditions for nor’easters. “It has not happened like this in years,” Kelley said of the persistence of that pattern.

That aligns with Francis’ research on how rapid Arctic warming may be making weather stick around longer. A phenomenon called The Greenland Block, an area of high pressure that prevents the jet stream from moving over Greenland, also helped send the warm ocean air spinning back towards New England.

“The same thing happened in March of 1956 when we also had back-to-back to back Nor’easters,” Kelley said of the Greenland Block’s role.

While it’s hard to say with certainty that climate change helped make these last few weeks feel chaotic, climatologists do predict that spring will continue to arrive early and winter storms will get more extreme. When those two trends overlap, the weather can feel erratic. Whether that overlap is a coincidence or a future trend will take more research and years of observation to figure out.

Yesterday ,on March 1st, the day started with a very warm and sunny weather. But towards the night the temperature decreased and it started raining. Today, on March 2, the temperature has decreased by 10 degrees since yesterday and there is a very heavy snowing out there. Recently, the inconsistency of the weather in NY has been making me really concerned.

For Pişkinpaşa, the chaotic spring weather she experienced in New York these last weeks felt like climate change, and that left her concerned about the future. “What we should do about it both as individuals and as a society?” She asked. “I think we have to start being careful and taking action.”

Looking to the rest of spring

The National Oceanic and Atmospheric Association expects April to June of 2018 to bring above normal temperatures to most of the U.S. And we’ve definitely been watching ISeeChangers in the West.  So stay tuned and help us report the changes. Share your observations of the heat and any other weird spring happenings with us. 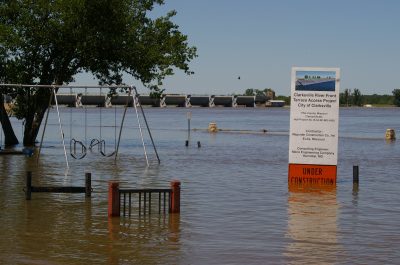