Teachers don’t often get to have fall gardens. But since retiring from Three Rivers Community College, Connecticut resident Judy Donnelly is outside rather than in the classroom when school starts in September. “I’ve had more time to walk around and notice what’s going on,” she says.

And this year, what’s been going on is drought. Forty-four percent of Connecticut is in extreme drought, according to the U.S. Drought Monitor.  Almost of much of Massachusetts is, too, and over 55% of the Northeastern region (encompassing New England and the Mid-Atlantic states) is in moderate drought.

Donnelly has recorded every drop of rain in her rain gauge (which isn’t much). For the first time ever, she’s irrigating her garden. “I used to just go out with the hose and spray things, but now I have to lay down serious irrigation hoses so everything doesn’t die in the first few weeks,” she says.

Which leaves Judy Donnelly – and some of our other Connecticut observers – with a pretty simple question.

This week (11/28-12/2) we’ve been getting a lot of rain in Connecticut. Many families are hoping that the underground wells will fill up before the ground freezes. Could our drought be over?

“Judy, this is a great question and a great series of observations,” says Morgan Tingley, an ecologist and conservation biologist at the University of Connecticut. His research looks at how entire communities respond to climate change. The forests of New England, where his grandmother taught him to observe nature, are among the places he knows best.

“What interests me is not just how individual species are shifting, but entire groups of species,” he says. “And particularly looking for larger scale patterns.”

The summer of 2016 went down as the driest ever recorded in Boston. During August, Connecticut, Delaware, Maryland, Massachusetts, New Jersey, New York, Pennsylvania, and Rhode Island saw record monthly highs. Most of New England, through southern and central Maine, remains abnormally dry with moderate and severe drought conditions as well.

His idea: in New England forests, these conditions are abnormal – and they may even be novel.

Origins of a sneaky drought

Records of low rainfall and dryness go back three years in Connecticut, according to Art DeGaetano, from the Northeast Regional Climate Center. “The dryness that we’ve seen has kind of been a three-year long thing we can look back and see rain fall averaged during that time was quite a bit below normal,” DeGaetano, says. Those statistics, he said, have “snuck up on me.”

These days, drought reaches all the way to the top of New England – including lower Maine. And climate changes are a big reason why:

New England isn’t alone in contemplating drought. This week a fire in the Great Smoky Mountains in eastern Tennessee killed three people and threatens Dollywood. Even before a worst-in-the-century fire, drought in the Southeast has grabbed headlines because it may be signaling a new normal.

Another reason Northeastern drought seems sneaky is that its complex impacts take time to sort out. To at least one tree expert, it appears that New England’s trees are not all affected equally. Neil Pederson, a tree ring expert at Harvard University, says the earliest trees to suffer under this year’s spreading drought conditions include black birch and red maple trees. “As bad as the drought of 2016 has been, it has been like a wolf—the Drought of 2016 is preying on the weak first,” Pederson has written on his blog.

UConn scientist Morgan says he, too, has water stress in his favorite trees. A few months ago ago, he says, fall foliage fell unusually early, from the top down. “It was like they were going bald up there,” he says. In nearby Marlborough, Connecticut, middle school students have shared drought observations to ISeeChange too. And it may well be that other Northeastern ISeeChange observers – on Long Island, in New York – saw some early drought days in 2015.

What breaks the drought

Back to Judy Donnelly’s garden – and her need for irrigation hoses. Two inches of rain this week hasn’t put much of a dent in a rainfall deficit of over 12 inches since the year started.

But all hope of a wetter Northeast isn’t lost, according to Maine climatologist Sean Birkel. “This drought is not exceptional,” he says, “not for Maine.” Birkel points out that extreme weather – droughts and heavy rains – may be on the rise. “New England is a humid environment.” Changing atmospheric conditions and changing boundary temperatures, he says, mean that “there has been an overall trend toward increasing total annual precipitation, linked to a warming climate.”

Meanwhile, Judy Donnelly’s lawn is dead. And she says she’s noticed herself speaking a little more harshly to her neighbor when he’s watering his lawn.

“I say, well your lawn looks nice but I can’t really eat the grass,” she laughs. Dryly. 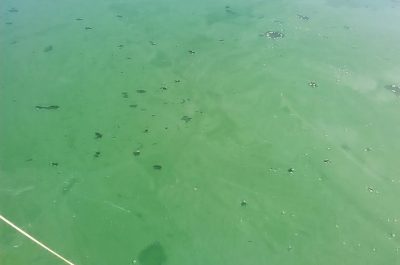 Green water near the Isle de Jean Charles: how safe and how common are Louisiana’s algal blooms?