The flames still raging in Colorado’s 416 fire are raising questions and increasing concerns as firefighters weigh options ahead in a warming climate.

Heidi Steltzer lives close enough to the 416 Fire blazing through Colorado’s San Juan Mountains that she can see it from her window. “Our house is distant enough to not be at risk of being burned,” she said. But the air outside is smoky and she, and others nearby have been keeping watch on the fire’s growth in the daily news and from reports from neighbors.

What’s it like when a fire is #10milesfromhome? I live in the mountains. A mountain town. In a mountain town, there are plenty of places to look up and over, and see the fire. I’d never seen wildfire burn. I sat one night on my neighbor’s lawn. They were away.

The view up the valley from their home is of the whole valley. I watched the fire, the flames, and the smoke as the sunset. The mountains grew dark. The sky grew bright. Helicopters flew water to the fire, thundering as they went nearly overhead. We’ve begun to grow accustomed to their drumming and thumming.

I tried to leave and head home. I tried to stop watching the fire that night. It was mesmerizing. Flames leapt up from the mountain side. I could see the silhouettes of trees. It was the day the fire grew from the back of Hermosa mountain around to the front side, to near many homes.

Steltzer, a biology professor at Fort Lewis College in Durango who studies mountains, knew this fire was serious when she read reports that groves of aspen trees were burning.

“Parts of the landscape, forest types, vegetation types that normally would not be dry enough to full-burn are full-burning” she said.

The situation led Steltzer to wonder if any species and ecosystems were safe from fire anymore.

Steltzer, like others in Colorado, have been documenting extremely dry conditions in Colorado since last November. 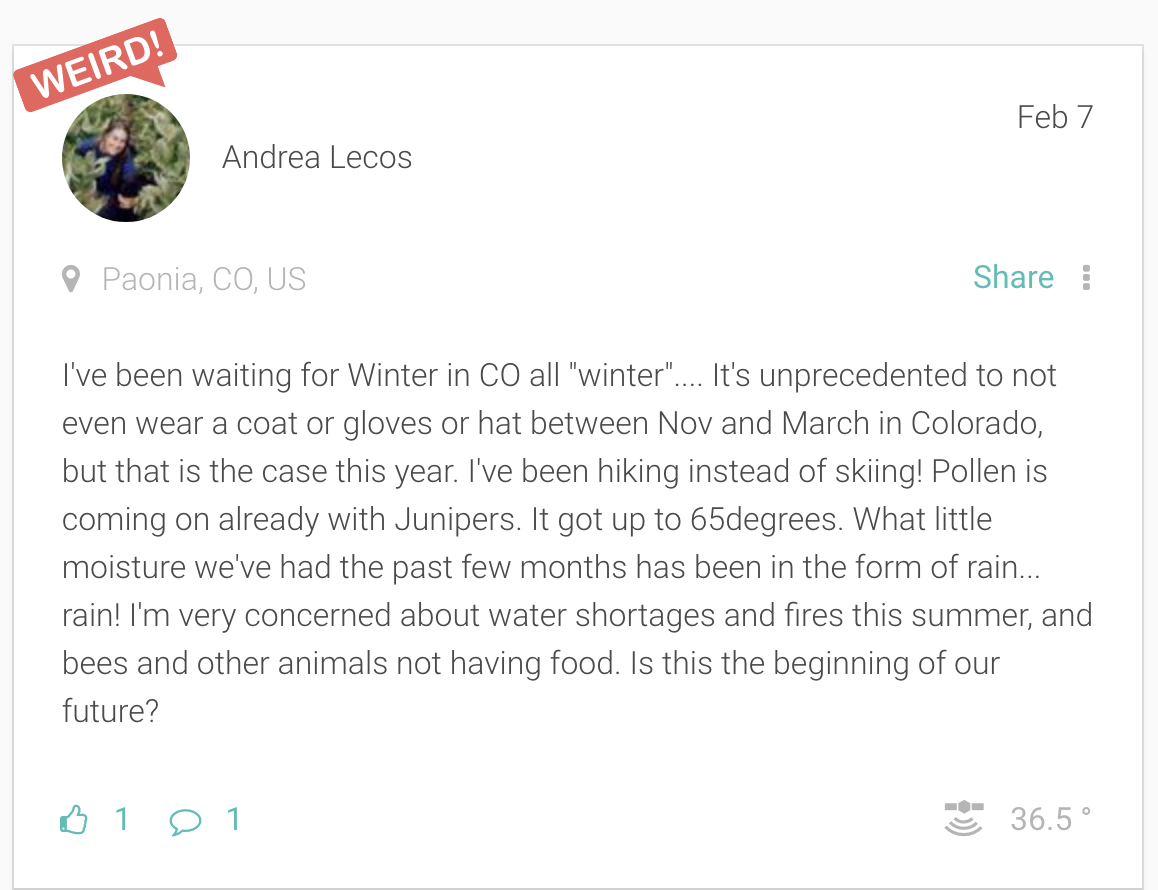 Winters with lower-than-average precipitation are expected to become the norm. Climate projections from researchers at the Mountain Studies Institute suggest that the San Juan mountains in the next 20 to 50 years could see a decrease in snowpack between 20 and 60 percent at elevations below 8,200 feet and a decrease of 10 to 20 percent above 8,200 feet.

Adding in some more photos of the browned, greyed, unhealthy Rocky Mountain Juniper. It’s nearly all the trees of this species in Horse Gulch, big ones and small ones. Ones near other Rocky Mountain Juniper and ones amidst the pinyon pines. We’d like to do spectral measurements of the trees to quantify their reflectance in the colors we see and in wavelengths of light we can’t see but can tell us more about water stress and health of the plants. Working on options to fund the purchase of the instrument we need to do these measurements.

“If you don’t have a lot of snow, those larger fuels aren’t going to be absorbing that moisture all winter long, and then when you have an early spring runoff or you have warm temperatures, then those fuels are already starting to dry out,” Korb said. 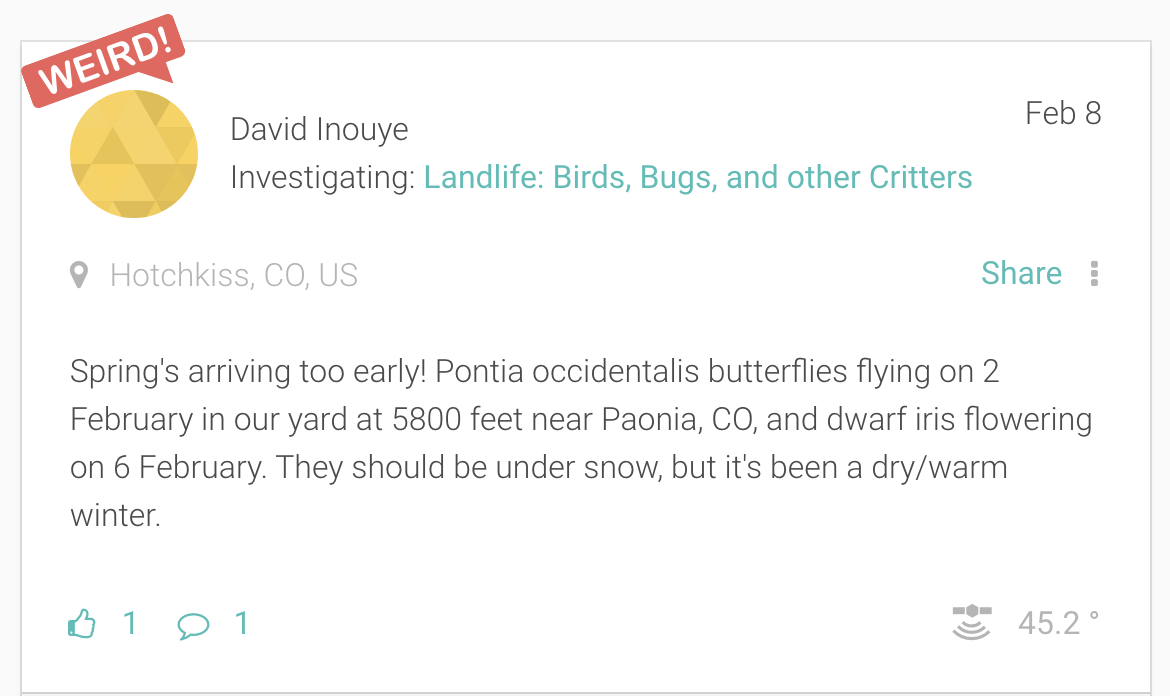 Studies have connected these periods of drought to climate change. According to a 2016 study by researchers at the University of Idaho and Columbia University, “Anthropogenic climate change accounted for ∼55% of observed increases in fuel aridity from 1979 to 2015 across western US forests.” 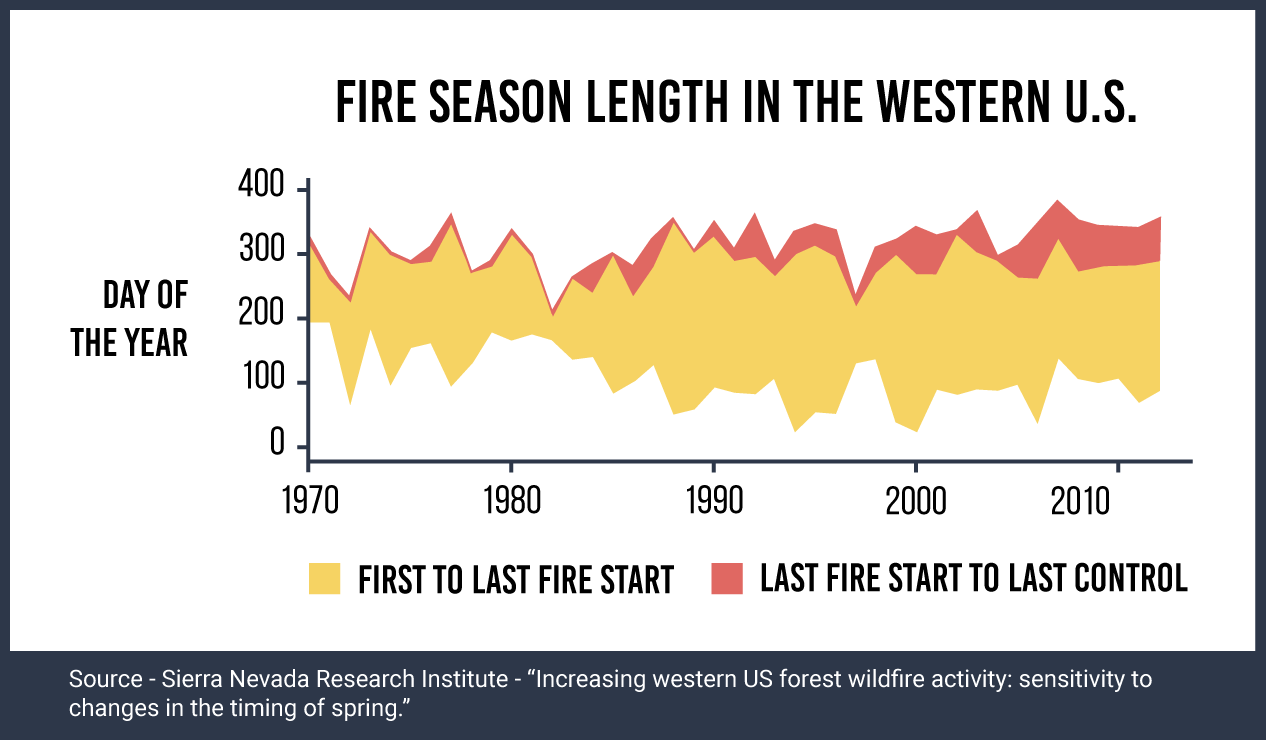 There is some snow left but most of it is gone

Snowmelt in the San Juans shifted two weeks earlier between 1978 to 2004. This means the gap between snowmelt and summer rain has gotten longer, and with it the risk of wildfire changes.

“Once that ignition happens, then it can move through the forest faster,” Korb said.

The 416 Fire has done just that, and this time it’s taking natural firebreaks into its blaze, which makes the situation riskier for nearby residents.

The aspen are burning

The forests of the San Juan Mountains, at least the ones at montane elevations where most people live, are made up of mostly dry tree species like ponderosa pines, juniper, and other conifers. Mixed in are stands of aspen trees that create pockets of wetter ecosystems.

We ran up to Beaver Reservoir this weekend and it felt downright tropical! The storm the day before made everything smell like wet earth. The reservoir was full and the aspen groves were flooded!

Because aspens have less acid than pine needles and because aspen stands allow more light to hit the ground and their leaves, the soils around them retain water. Korb said fire fighters may use aspens as a barrier when trying to contain a wildfire. But not this year.

“Essentially what made them barriers no longer exists,” Korb said. “You’re getting these fires moving at a faster rate of spread because it takes less time to dehydrate those fuels to allow them to burn.”

For Steltzer, the burning aspen stands were a sign of the power of the 416 Fire. “I was like, ‘Oh no. This fire’s not going out until July,’” she said.

It also made Steltzer wonder what else is changing this year.

Can the tundra burn too?

Much of Steltzer’s research happens in the alpine tundra, ecosystems at higher elevations above the treeline. Alpine tundra areas in the San Juans rarely burn because, according to Korb, they are typically sparse in fuel, and cool night temperatures bring increasing humidity which makes them wetter in than lower elevations. 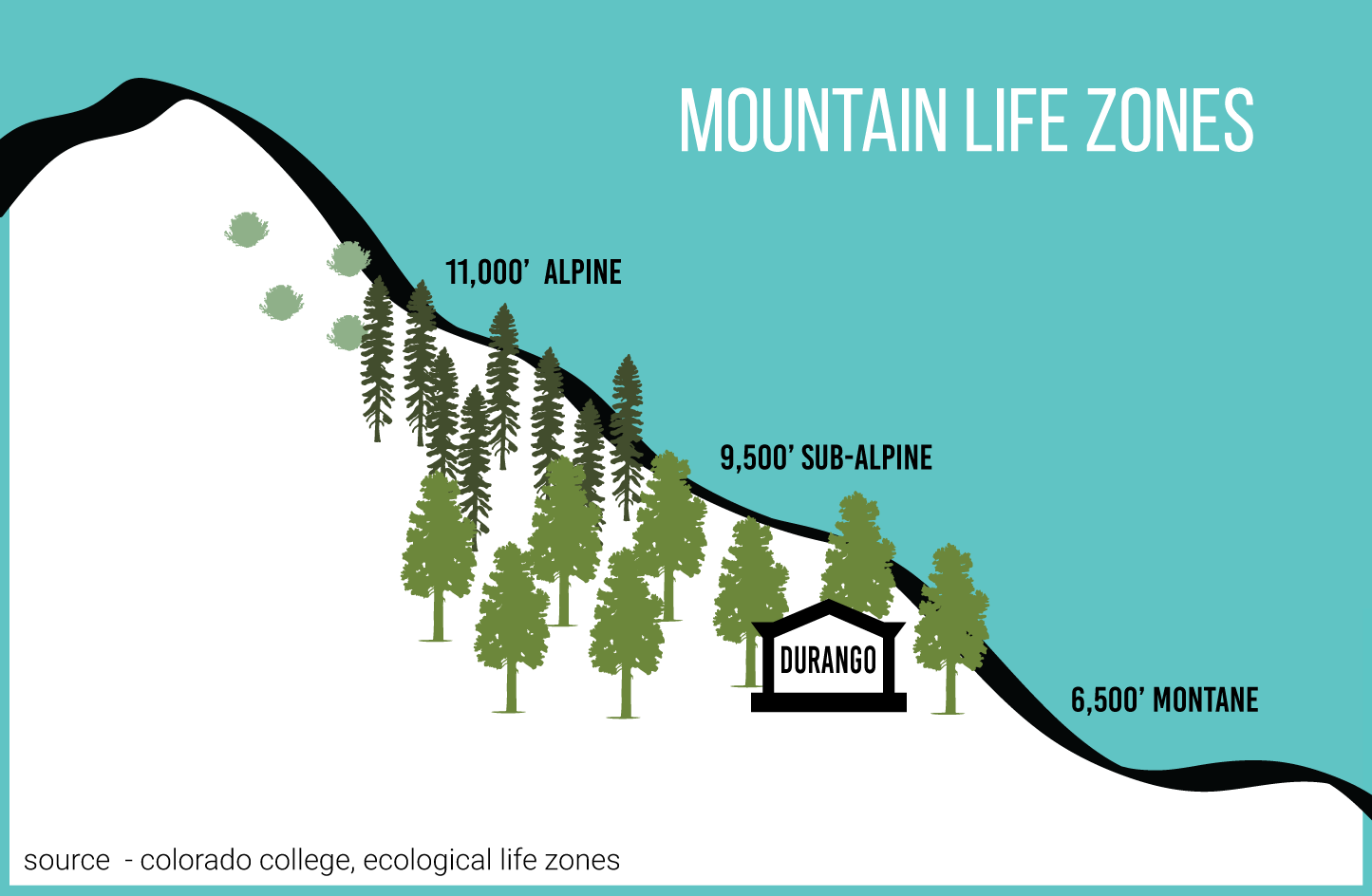 But Steltzer said that spring at alpine elevations is changing. Previously snowpack would stick around until the monsoons came. In recent years, Steltzer said, she’s seen snowless alpine areas as early as May.

So, could the new dry period leave room for fires?

Korb thinks it’s unlikely. “It’s not that our alpine landscapes can’t burn, but they really aren’t designed to burn,” she said. “So where we are, I don’t foresee in the future that we have an issue to worry about.”

But people are worrying about tundra fires in Alaska and Greenland, which a 2016 study suggested could see up to a four-fold increase in the probability of fire by 2100.

Where the snow melted there is minor flooding in the low lying areas. There is more snow falling and it is 32 degrees before the sun sets. The sun will set at 11:11 pm.

At high elevations and latitudes, the risk of human-ignited fires is relatively low. But in a study with a global team of researchers, Jim Randerson, a physical sciences professor at the University of California, Irvine, found that the number of lightning-ignited fires has increased around the Arctic tundra since 1975. He said this trend can be expected at lower latitudes too.

“I think for the Rockies that’s a threat– that lightning is going to become an increasing problem at higher elevations,” said Anderson noting good theoretical evidence for increased lightening rates in North America, though it’s still up for debate.

In the San Juans, Korb said that lightning is typically seen only at alpine levels during the monsoons, when things are too wet to start on fire. So she says she’s not concerned about the tundra in her area burning. But, she said she is worried about the region just below it: The subalpine region.

A subalpine forest in Colorado in mid-June without snow. This may not look like much. It’s what’s not here that is surprising. There should be piles of wet snow. Snow that won’t hold one’s weight, so each step leads to wetter and wetter feet. Across Colorado, it was a low snow year. There is a fire #10milesfrommyhome, but the lack of snow is leading to fires elsewhere too.

Because the 416 Fire is still burning, Korb hasn’t been able to check whether it’s affected subalpine areas yet, but she suspects it has. Subalpine forests traditionally burn only every 100 to 200 years, but a fire made it to this elevation just 12 years ago.

What does this mean for firefighters?

Fritz said that trees that have a high rate of beetle kill fall over faster and easier during wildfires, which makes firefighting more dangerous.

“Fire behavior is more extreme, prompting firefighters to back off even more and rely more on aerial firefighting, and larger air tankers,” he said. “Both techniques are costing lots more money and allowing the fires to get bigger and last longer.”

a lightning strike from the night before ignited a 5 acre fire on BLM land in an area previous treated with a hydro-axe, causing Hotchkiss Firefighters a big problem. With help from Paonia Fire and Crawford Fire, as well as 7 drops from air tankers, the fire was contained before threatening homes. I’m wondering about the usefulness of this type of fuel mitigation. #fire #later #more #happy

In the Gold Rush areas of northern California, many areas were completely cleared of trees in the 1800s. One prevalent tree in the mid-altitude areas, such as my property at 2700 feet in Grass Valley, was the Sugar Pine. After the mining activity waned, the predominant pine in this altitude became the Ponderosa Pine. I don’t know why this is the case, but my observation on my land is that the Ponderosa sprouts much more readily than the Sugar Pine. The densely overgrown forest areas, so prone to wildfires, is populated with these Ponderosas, plus Incense Cedars, Douglas Fir, and various oaks. The Pondarosa pine is subject to bark beetles and pitch canker. We have had to remove over 100 Ponderosa pines from our four acres. The sugar pines do not seem to be susceptible to these pests. Of course, dead or diseased trees are much more of a fire hazard. Perhaps it would be helpful to avoiding wildfires if more Ponderosa Pines were removed.

Korb feels that better forest management is the best way to prepare Colorado for climate that’s increasingly friendly to wildfires.

For decades government officials and federal forest managers shied away from fire and did everything they could to keep wildfires from igniting. “The first measure necessary for the successful practice of forestry is protection from fire,” Henry Graves, the second chief of the
U.S. Forest Service, declared in 1910.

Managing for fire suppression continued on federal lands until the late 1960s. 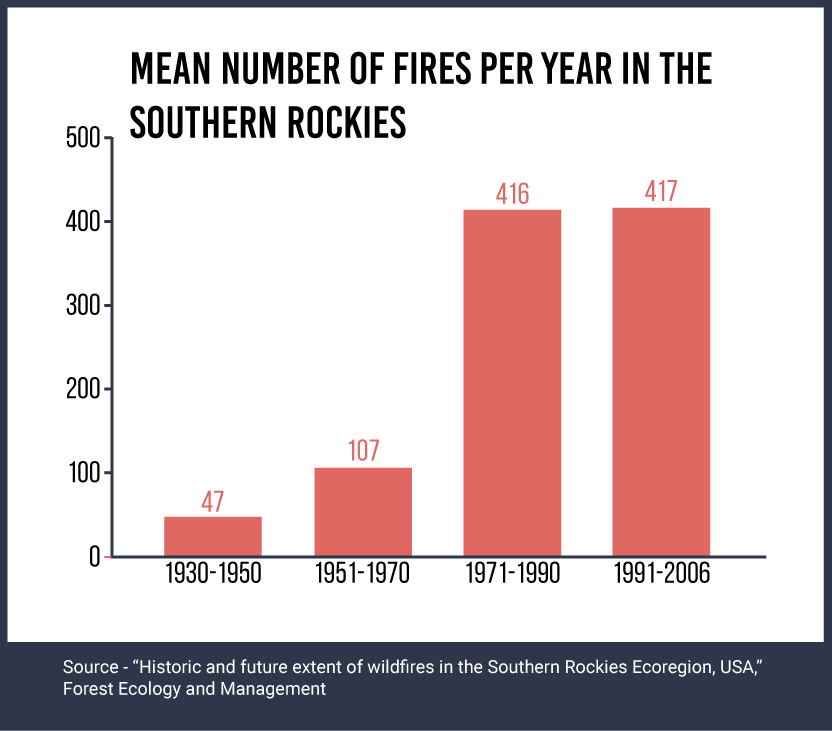 Current best practices suggest that introducing controlled fires into systems could help prevent larger, wilder wildfires. “You need to put the right type of fire into the forest, but the forest has to be in the conditions in which it evolved,” Korb said.

Dry forests at elevations most heavily populated by humans are the most in need of fire management. The practice of keeping fires out of these areas for so long, Korb said, has enabled shade-loving tree species like Douglas-fir and white fir to grow tall and close together where historically they would have burned just several feet off the ground.

“We’ve allowed fuels to build up,” She said. “So instead of the fire burning on the surface, it’s burning up in the canopy of these trees.”

In her research, Korb has been working on clearing sites of some of that fuel using prescribed burns and cutting to learn how to build more fire-resilient forests.

“We can’t make the snowpack last,” she said. “We have to make these changes on a landscape scale.” 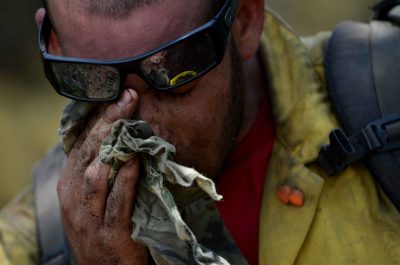 The Year in Change: Extra extreme and extra expensive 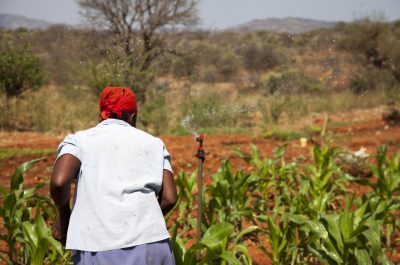 Floods and drought force Kenyans to cope with climate change