Spring came early this year. Here’s what to look for as we head into summer

As spring starts earlier each year, it can be easy to forget the subtle signs of how the season is shifting. According to NOAA, March temperatures in the U.S. have been above average in seven of the last ten years. It’s become something expected, normal even.

But from his Philadelphia patio, a nectarine tree won’t let Mike Ruzzo forget that the earlieness is not normal. For the last few years, he’s kept a track of the tree’s spring progress. “That has been consistent each year getting a little bit earlier,” he said.

Ruzzo pays attention to trees. He notices when buds begin to form, when leaves break open and when blooms begin to fill in the branches.

This year, trees began showing those signs of spring very early in his area. “It’s just been overall very warm which is nice for getting out but that doesn’t mean it doesn’t feel weird.”

Ruzzo isn’t the only ISeeChange community member who noticed spring arriving early this year. ISeeChangers from Louisiana to Bulgaria saw signs of spring before they expected to, in some areas up to a month earlier than the 30-year average:

Early spring can also be a warning sign of weird weather and climate trends to come as we transition to summer. Here are the things to look for:

False springs occur when spring starts early, and then temperatures drop below freezing again. This can damage tender plants like fruit trees and hurt harvests. Frost damage after an early spring in 2012 resulted in over $200 million of damage to fruit trees in Michigan alone. Fruit trees in particular are at risk:

Trimming fruit trees in the snow. In the last two days it feels like the weather has tilted toward spring. It’s still in the 20’s every night but the snow has started to melt off.

This dramatic shift from warm back to cold can also be hard on migratory birds. According to the Audubon Society: “The perfect time for a bird to arrive on its breeding grounds is a balance of two pressures. On one hand, it needs to arrive early to claim prime territory. On the other hand, if it moves north too far or too fast, it might freeze or starve.”

This picture shows bird feeders that are filled with snow! What a crazy storm, this picture really puts it into proportion.

Same goes for animals waking up for hibernation and losing food sources. This year, bears were seen out of hibernation as early as February in the U.S., Russia and Finland.

If you experience a false spring or any kind of late freeze in your area, be sure to tell us about it in a new post and keep eyes out for the impacts!

When spring starts early and a late freeze doesn’t occur, the growing season becomes longer than normal. If this happens in your area, you may experience a range of impacts depending on where you live and how much rain you get throughout the warm period.

When spring starts early, so do allergies

Some of the earliest plants to bloom in the spring are trees which can be a major source of allergies. In particular, birch, cedar and oak trees produce pollen that is highly allergenic according to experts at the Asthma and Allergy Foundation of America.

Pollen is already everywhere. I don’t think this happened this early last year.

In addition to earlier allergies, early springs may also be making allergy season more severe. A 2019 study, researchers at the University of Maryland found that places that experienced early spring had a 14 percent increase in the prevalence of seasonal allergy symptoms as compared to years when spring arrived at a normal time period.

The pollen is really easy to see on my black car. It even rained yesterday and yet the pollen is back on my car. This allergy season has been really bad.

As with many impacts of a longer growing season, allergies are affected by precipitation as well as temperature. Rain can help wash pollen away and reduce allergy symptoms, so if you’re experiencing a dry spring, your allergies may be worse.

Last year, we wrote a deep dive story how more severe allergy seasons may hit children the hardest. If you or someone that you know is an allergy sufferer, tell us when the sneezing and itchy eyes start this year and how far into summer the symptoms last.

Mosquitos and ticks take advantage of the warm temperatures

In addition to allergies, longer growing seasons can increase health risk related to bugs that are disease vectors like mosquitoes and ticks because they become active earlier in the year. With that in mind, both mosquitoes and ticks prefer wetter conditions, so if spring is dry in your area, you will likely see fewer of both types of bug.

Mosquito. Just killed one. Wayyyyy too early for mosquitos in Vancouver

Ticks typically require the ground temperature to be above 45°F (7.2°C) to become active while mosquitoes prefer temperatures above 50°F (10°C). With more warm-weather days, come more days at which you may be at risk of being bitten by either a mosquito or tick, and thus more at risk of picking up a disease.

According to the CDC, the most common diseases spread by ticks to humans in the United States are: Lyme disease, babesiosis, ehrlichiosis, Rocky Mountain Spotted Fever, anaplasmosis, Southern Tick-Associated Rash Illness, Tick-Borne Relapsing Fever, and tularemia.

Earlier this week in Marlborough, CT, the temperatures ranged from about -2 to 18 degrees Fahrenheit. I did not wear my coat yesterday and today, however, because it was really warm. People around me who are usually very healthy are getting the flu. This yo-yo weather is also affecting wildlife, too; I saw two ticks in my house, and they do not usually come out until summer. Maybe we will have abnormal Lyme disease statistics this year. It is raining now, and there might be an ice storm tomorrow morning causing a 2 hour school delay, two of which we had last week.

The most common mosquito-borne illness in the U.S. is by far West Nile virus, but other diseases can impact communities as well. In the warmest areas of the Southeast and Texas, and particularly Florida, communities have had a slight risk of diseases like chikungunya and zika in the past. Last fall, ISeeChangers in the Northeast observed unusually high levels of the mosquito-borne disease EEE, Eastern equine encephalitis virus.

We had a thunderstorm and 0.45″ of rain overnight. Still way behind for monthly rainfall, but every bit helps. The air is refreshingly cool today, still, we came in early because of EEE mosquito warnings.

If you’ve seen mosquitoes or ticks out and about already this year, or if you have an experience with a vector-borne disease, be sure to post about it.

While mosquitos and ticks have the greatest impacts during a rainy spring, dry weather during an early spring can also be dangerous. As the weather warms up and plants become active, they may dry out.

Early springs can be especially problematic in areas of the Western U.S. which rely on winter snowpack for the majority of their annual precipitation. In forested areas, dry conditions make trees more vulnerable to pests and can create the prime fuel for larger and stronger wildfires. Research has found that wildfire activity is often more severe after early spring snowmelt.

Colorado’s “Forever” fire Season continued Sunday, this time in Conifer. Unbelievable to have this going on in early Feb. at that elevation. The Front Range and plains have had almost daily brush fires for weeks. The Lower North Fork Fire, March 26th, 2012, also near Conifer, kicked off last year’s fire season. It may be the Front Range is in for another bad year. I’m thankful for the snowpack at lower elevations in our region, we can use some off-time to prepare for this year. #fire #earlier #less #sad

Early spring can also be difficult for farmers if rain is below normal. Longer growing seasons with plenty of water can lead to good harvests, even bigger ones.

Amazing sour cherries this year in our orchard in spite of the drought — the most cherries we have had in the past 20 years. Likely due to our unusually early last Spring frost — almost a week earlier than any of the past 20 years we have been here. Finally getting some monsoon rainfall, but still in serious drought. Apples and pears are coming on strong as well–good year for fruit!!!

But without the necessary water from rain, farmers will either have to make up for it through irrigation or their crops may struggle.

Horse pasture grass is completely dead. We had to supply hay for our horses early. Hay prices were $2-3 more a bale. Irrigation ditches were empty much of the 2018 summer in Durango, Colorado. This example illustrates the dryness of climate. The total time for irrigation was 3 weeks.

If you are experiencing an early and dry spring, tell us what it’s like in your area and keep an eye on your fire risk.

Peaceful sunset, but the good weather is deceiving. Normally at this time of year, we get lots of rain, but this month we have had none.

Other weirdness to look out for as we head into summer

Don’t forget that you’re the expert in your own backyard and you may notice signs of change that we haven’t even thought of. Every sighting matters!

Early summer. Without personnel, the new ponds at city park cultivate acres long algal mats. But there have never been so many people exer ising in the park! Amazing to see 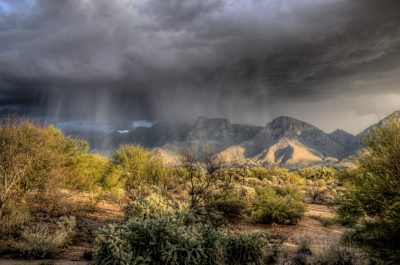 Community Investigations What to watch September 1, 2017

Your thoughts and your ‘shots: We want ’em. For science. Happy Labor Day! 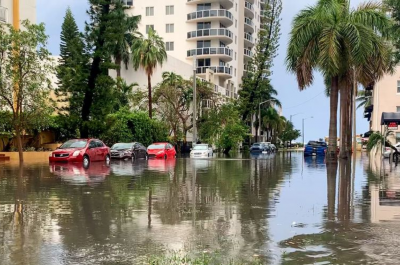 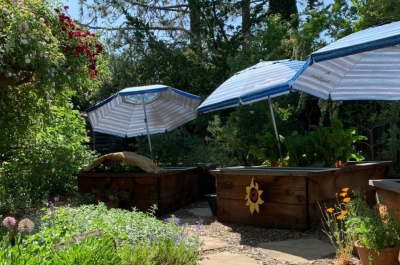